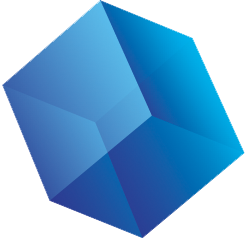 Form Schema's define the configuration, valid users, data collection objects, stage workflows and print layouts of a form.  In this way they encapsulate digital tasks processes required on a project.

The DEFINITION of a form is known as a 'Form Schema' while the INSTANCES of created forms are known as 'Form Instances'.

Form Schemas are defined with the FormBuilder application using the following tools:

Superusers, and users with the FormBuilder role, have access to the form designer tool from the System Admin menu.

The Schema List is the starting page for Managing, Creating and Publishing forms.  Users will see 2 sets of forms in the list:

Create a new Form Schema with system default values and open it the Schema Designer with the Schema Properties panel open.

Note: Reserved characters that can't be used for schema names are:

On the Schema List, you can apply a filter to limit the number of forms you see at once.  The filter remains until you clear it.

Filter schemas by name, in the left hand search panel, or by category in the right.

Clear the filter with

Name of the Form Schema, that users also know as the 'Form Type'.  Click on a Schema Name to open the form for editing.

The latest revision of the schema published to projects.  A blank value signifies an unpublished schema.

The user that created the schema.

The user that last edited the schema.

The date and time the schema was last published to a project(s).

The date and time the schema was last edited.

The value entered in the Form Properties to set a type/category for the schema, which can be used in the Category filter.

Simulate the form to see it's layout on various devices.

Simulate the execution of the form as one of the User Roles.

Publish the form to projects.

Archive the form and remove it from new creation.

Simulate the form execution on a phone, tablet, laptop to get an idea of how the layout looks on each type of device and how it responds to orientation changes.

Rotate device between Vertical and Horizontal.

Simulate the form execution as one of the five roles of Client, Contractor, Engineer, QA and Superviser.  This enables testing the workflow of the form and permissions and visibility on each of the controls. 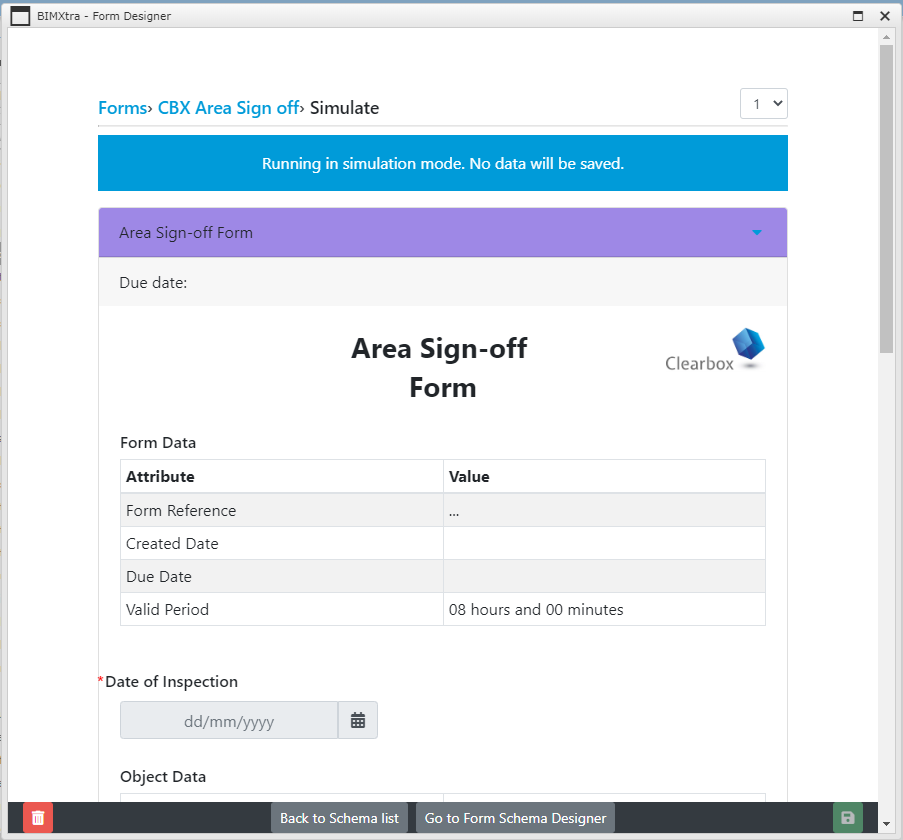 Open the form in the Schema Designer for editing.

Publish the form schema for use on projects.  Publishing a form from the schema list sets the Project Config Forms list to include the schema.  Thus a form can be removed from a project by removing it from the project config list as well.

Any projects that the form has already been published to will already be listed.

Therefore a form can only be published to a project that the user has Project Access to.

Once a form has been published that Revision of it will be used immediately for newly created forms on the project.  Existing forms are not modified and will still complete in their already published format.

The are validation rules that must be passed in order for a form to be valid and published:

Mark a schema as deleted, meaning it's no longer available in the schema list and can no longer be created in projects it's been published to.

Note: Marking a schema as archived stops further processing of any created instances of that form, no matter what state they are in on a project.

When you have selected a schema from the schema list, it opens the schema designer.  This is where the schema's content, actions, workflows and print layouts are defined.

The Schema properties can be edited from:

The pencil Icon next to the schema name at the top of the page,

The propeties Icon in the top right hand corner of the page.

Show or hide the control settings shown in the left hand panel, effectively switching between a 'Edit' mode and a basic 'Preview' mode.  A more complete preview of the form is available via the Simulate and Simulate As tools.

Open the Print Designer to configure form prints and set the print used by default.

Open the Workflow Designer to configure the form workflows.

Save the currently editing schema as a new one, with a new name.

Note: The Schema Designer remains in the existing file, and does not open the newly created file.  Return to schema list to select and edit the new file.

Save changes to the currently edited schema.  The Save confirmation panel also contains tools:

View the definition of the Schema

Close the save confirmation panel

If you have unsaved changes in a schema you will also be prompted before leaving the Schema Designer: 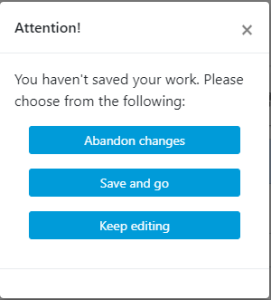 Note:  Once a project has been published to a project in can't be deleted, as it is then required in the project configuration.

Print Designer is used to configure Custom Prints.  There can be several prints defined but 1 of them must be set as Default, and this is the one that will be printed by the Construction page. 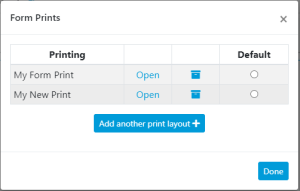 Opens the print layout for editing,

Sets the default print layout that will be used print Custom Prints.

The Schema Output panel enables a custom print layout to be defined.

There are 3 main elements to setup:

Save the print layout, where you also see the same options as the Form Schema Save panel.

Return to the Schema Designer for the current schema

Toggle between the pages of the print layout.  Add a new page with

Select the image to position as the page background.  Currently only A4 size paper is supported.

There are 3 types of controls that can be placed in the print:

Select the control value in the schema definition to place on the page.

Shows the control has been placed on the print layout.

Once a control is placed, drag the boundary position and size it to suit.  Dummy text is shown at this stage to aid layout, but during execution, the actual values of the control will be printed within the boundary you are positioning.

Delete the control from the print layout. 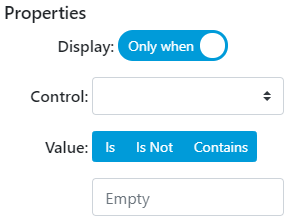 Select a placed control in order to define the conditions under which it must print.  This is the same function as that to display the control in the form definition,

Workflow Designer is used to define the stages of the workflow for a form, which containers to include in each stage and their editable/visible state.

Set the state of each Container at each stage of the workflow.  At any stage, there can be many containers but only 1 should have a sign off that completes the workflow stage.  This setting works in conjunction with the Container Roles, ensuring only valid users have access to containers through the workflow.

The preview at the bottom of the page, shows a representation of the workflow with each container status.